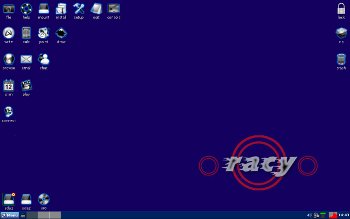 What you will find here are a small, but growing collection of packages for Puppy Linux Wary and Racy. The ISO's can be downloaded from here.

Although not the latest version of Puppy Linux and released in 2013, Racy and Wary Puppy is for those who have hardware from that era or newer. However, I am using Racy-5.5.1 on somewhat old 2005 Sony Vaio 1.73ghz, 80gb HDD and 2gb of maxed out RAM and it has injected new life into this ageing laptop. Enjoying using Racy on this laptop so much that it inspired the creation of this website which was then coded on this particular laptop.

I must give a big thank you to Mike Walsh for his invaluable contribution to this website, he has done much work behind the scenes making his and other talented Puppians Wary/Racy packages from the forum available here.

If you are using any version of Puppy Linux released before September 2014 there are vulnerabilities affecting bash and pre v1.16 of wget. Installing these two packages (for Wary/Racy only) fixes the vulnerabilities. bash-3.0.22-i486.pet and wget-1.16-w5-i486.pet More information is available on the forum.

Also available is the Service Pack that upgrades Wary/Racy-5.5 to 5.5.1 fixing several bugs

Glibc-2.20 - Important Update
This is battleshooter's 'glibc-2.20-upgrade' which he originally put together a few years ago for people running Racy, Wary & Carolina who wanted to run the latest Chrome/Chromium. Mike Walsh picked out the relevant bits and packaged them up in a tarball, along with instructions, because they need to be installed in a specific order. Mike's advice, "I can't recommend this highly enough, because it makes using a lot of newer packages possible." Download (74Mb). This icon

next to a package signifies that the package requires this Glibc-2.20 update.
geeqie-1.0-i586.pet
Geeqie is an image viewer and image organiser program. It was first released in March 2010, having been created as a fork of GQview, which appeared to have ceased development. Geeqie has many improvements over its predecessor.

Palemoon_27.9.4_sse_glibc219_tweak-portable.tar.gz
Request from keniv (forum name) to include Palemoon Poratble which was put together by Mike Walsh. Please see Mike's forum post for details on using PM Portable.
OperaMini.sfs
nic007's description: The browser is very fast because the data is compressed by Opera's proxy servers and you will also save on data usage (generally a savings of about 80%). The browser opens the mobile versions of web pages by default (if available) but has no problems displaying desktop versions. The browser is excellent for general browsing but does not allow media streaming. Requires Java Runtime Environment jre-1.7.0.05.sfs.

Forum post.
sfs2pet-1.2.pet
Converts an SFS file into a PET file. Adds the option to the right-click menu with resulting PET being deposited in ~/my-pets
vlc2.0-Racy.sfs
VLC is an open source cross-platform multimedia player and framework that plays most multimedia files as well as DVDs, Audio CDs, VCDs, and various streaming protocols.